On Thursday night Kirsten, the YAGM in neighboring Nyiregyhaza, and I hosted Amerikai Este (American Night) for people in our congregations who wanted to learn more about America.  It essentially ended up being Minnesota night because Kristen is from Rochester, so we shared pictures of our lovely state, families, friends, and homes.  We also served American, well, Minnesotan, food: tater-tot hotdish, green bean casserole, orange Jell-o with bananas and marshmallows, and apple crisp.  It tasted like home!  Kirsten and I were very happy to eat Minnesotan food again. 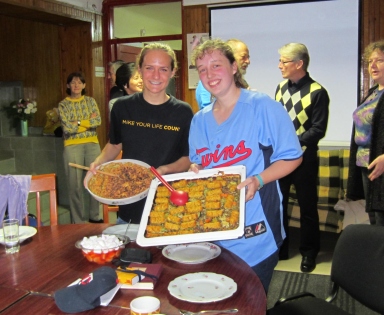 The Hungarians to whom we served to food were a bit skeptical about the meal because it was so different from everything they eat here—there was no paprika, no hot peppers, and no liver.  It was very strange for them but they ate it all, said it was ‘finom’ (delicious), and even asked for seconds.  The tater-tot hotdish went over very well because it is made of the Hungarian essentials, meat and potatoes.  The Jell-o threw people off for a bit because fruit, marshmallows, and Jell-o should not go together, but when we told them it was a very Lutheran Minnesotan dish they all laughed and had to try it.

Mom, you should be happy to know that your apple crisp is very much loved, even in Hungary.  There was no non-stick spray so some stuck to the edges of the pan, but Pastor Mihaly took care of the problem by sitting down with the pan and a spoon and chipping away at the baked-on apple crisp.  Mihaly’s friend Grandvil also sat down next to him and told Mihaly to feed him some of the topping that was so laboriously pried out of the pan.  It was quite the sight.  Grandvil’s wife even asked me for the recipe, so I have to convert the measurements to the metric system and give it to them the next time I see them. 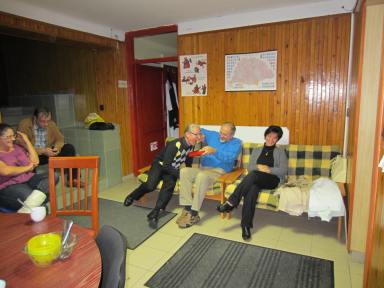 When Kristen and I shared pictures of our homes the people in our congregations listened very nicely as we tried to explain, in Hungarian, our lives in America.  A woman was there who so kindly offered to translate for us when we did not know the Hungarian to describe what was in our pictures.  It was nice to share our families with the people who are going to serve as our families for the coming months.  They have so graciously opened their homes and hearts to us, and now they know a little more about where we come from.  It’s a good feeling.  After sharing pictures and our meal, we taught the group “This Little Light of Mine” in English.  We sang the song to celebrate our time together and then we said ‘Szia!’ and headed home for the night.

Amerikai Este was a lot of fun.  I am so glad we were able to share a little bit of home with our Hungarian families.